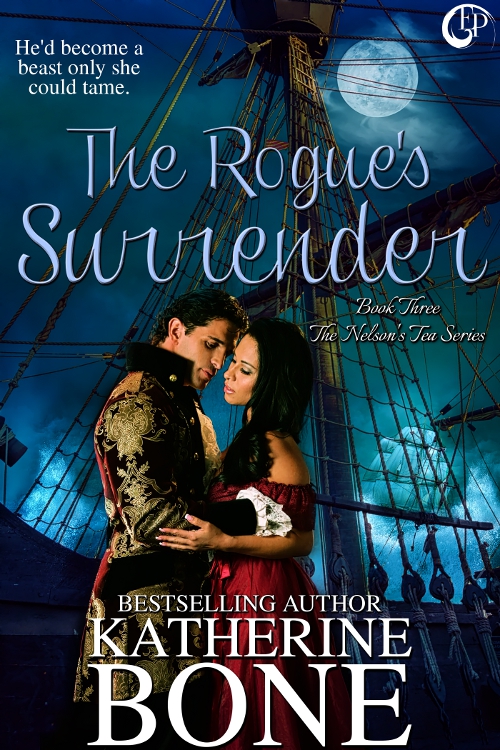 He’d become a beast only she could tame.

Marked for death! Señorita Mercedes Vasquez has been betrayed by a member of Nelson’s Tea. Now her life is in the hands of the man she couldn’t save, a beast forged by Spanish hatred.

Lord Garrick Seaton, aka Captain Blade, is the only one who has a chance of pulling off a lifesaving mission. To do so, he must go to Spain and face memories of captivity and torture. But the fiery Spanish lady he seeks to rescue proves to be the greater threat. Can he protect his heart, or will she demand his complete surrender?

Mercy’s gaze narrowed on the screened doorway with nerve-wracking precision.

The screen door handle jiggled slightly but stopped when it met grinding resistance. Muffled curses followed then a key grated in the lock.

She smothered a moment’s panic as the lock disengaged.

No. No. No, it isn’t him. Something is horribly wrong!

Her instincts sprang to life, and her senses climbed to extraordinary heights. She quickly retrieved her reticule, reaching inside to grab the small pistol she carried there. When her fingers grasped the gun, she exhaled in relief, and then aimed the weapon’s barrel at the cabin door.

Her heart thumped in her ears as the seconds dragged by.

She straightened her spine and cocked the trigger, widening her stance. No one enjoyed being backed into a corner, especially a spy. She’d shoot, if needed, with no regard as to who this man was. Too many lives depended on what she’d stored in her brain. If she wanted to make it to St. Mary’s in time to meet the vicar, she had to live.

The door squeaked on the hinge, opening with agonizing slowness like an ominous fog sweeping over a riverbank.

Que Dios le ayude. It was as if the invader wanted to increase her agony, making her anticipate the intrusion with paralyzing dread.

Her nerve endings shrieked like struggling, cornered rats as the door widened and a man’s long muscular leg prepared to step across the threshold. She held the gun steady, biting her lip in anticipation. Her trespasser wasn’t like anyone she’d ever seen before. His tall black boots and black breeches matched a fine woven linen shirt, over which he wore a dark draping broad-shouldered maroon jacket with intricate gold embroidery at the shoulders and sleeves. His shoulder-length black hair accentuated the distinguished lines of his high cheekbones and an aquiline nose. A black patch prevented her from looking into a pair of earth-shattering blue eyes.

Dios mio, he is formidably handsome. She was in true danger now. Her knees threatened to buckle. An impending swoon clouded her peripheral vision. She wasn’t afraid, per se, but paralyzed by an all-compassing innate awareness that awakened her body. This had never happened before.

He cocked his brow oddly in response, skin tugging cruelly above the left side of his mouth.

She immediately froze. Was the expression painful? Who had scarred the man?

Alarms sounded in her head. Lethal calm resonated from him as his stare left her to search the room with an odd familiarity. Her heart twinged. Was this Captain Blade, the notorious Lord Garrick Seaton? His comfortable stance, the way his gaze stroked the room like a loving caress, filled her with strange misgivings. It was as if he belonged here — not Eddie — not her.

She opened her mouth to speak, but nothing came out.

The devilish man moved his left hand across his chest and took a humble bow. “Señorita.”

Thanks for invitin’ me to sail into your home port, Lady Rachelle! I’m thrilled to be here to help celebrate the #RomanticIdea Summer Blog Exchange with you and your readers! Woot!

But before I share my recipe for summertime romance success, I’d like to share some great news! The final book in my Nelson’s Tea Series, THE ROGUE’S SURRENDER, is finally ready to launch into epic adventure near you, me hearties! Garrick, Viscount Seaton, is back and after recovering from traumatic injuries, he’s met his match in a Spanish señorita, Mercedes Catalina Vasquez Claremont.

To celebrate THE ROGUE’S SURRENDER, I’m sharin’ a special way to include romance, pirate style, into your summer! There’s nothing more romantic to a pirate than watching the sun rise or set with the one you love and a cool summer breeze at your back. Need extra ambiance to enhance the experience, you say? Why, all you have to do is add a stout cup of coffee, sit back, and say “ARRR!” It’s never too early or too late for rum! Huzzah!!! (Pirate!)

Mix together in glass and top off with ground cinnamon and/or whipped cream.

National best-selling historical romance author Katherine Bone has been passionate about history since she had the opportunity to travel to various Army bases, castles, battlegrounds, and cathedrals as an Army brat turned officer’s wife. Who knew that an Army wife’s passion for romance novels would lead to pirates? Certainly not her rogue, whose Alma Mater’s adage is “Go Army. Beat Navy!” Now enjoying the best of both worlds, Katherine lives with her rogue in the south where she writes about rogues, rebels, and rakes—aka pirates, lords, captains, duty, honor, and country—and the happily-ever-afters that every alpha male and damsel deserve.

Happy release day Katherine! Be sure to check her out on social media for more about her series and upcoming releases.

One thought on “#RomanticIdea with author Katherine Bone”