Join me on a (virtual) trip to some of the most romantic locations around the world and find your next favorite romance book at the same time.

Kim Headlee lives on a farm in southwestern Virginia with her family, cats, goats, Great Pyrenees goat guards, and assorted wildlife. People and creatures come and go, but the cave and the 250-year-old house ruins—the latter having been occupied as recently as the midtwentieth century—seem to be sticking around for a while yet.

Kim has been an award-winning novelist since 1999 (Dawnflight, Sonnet Books, Simon & Schuster) and has been studying Arthurian legends and literature for nigh on half a century.

Check out a video interview with Kim here

Morgan le Fay, sixth-century Queen of Gore and the only major character not killed off by Mark Twain in A Connecticut Yankee in King Arthur’s Court, vows revenge upon the Yankee Hank Morgan. She casts a spell to take her to 1879 Connecticut so she may waylay Sir Boss before he can travel back in time to destroy her world. But the spell misses by 300 miles and 200 years, landing her in the Washington, D.C., of 2079, replete with flying limousines, hovering office buildings, virtual-reality television, and sundry other technological marvels.

Whatever is a time-displaced queen of magic and minions to do? Why, rebuild her kingdom, of course—two kingdoms, in fact: as Campaign Boss for the reelection of American President Malory Beckham Hinton, and as owner of the London Knights world-champion baseball franchise.

Written as though by the old master himself, King Arthur’s Sister in Washington’s Court by Mark Twain as channeled by Kim Iverson Headlee offers laughs, love, and a candid look at American society, popular culture, politics, baseball… and the human heart. 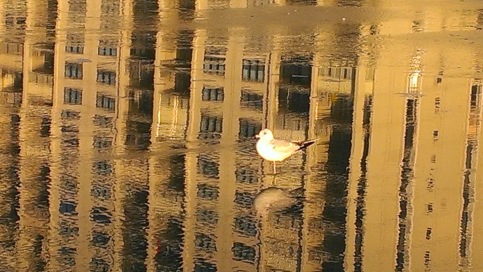 I love to travel but I also love to find great deals on lodging and transportation so that I can use the rest of my vacation budget to splurge on activities. My husband and I began a tradition a few years ago to make a beach getaway in November, which is the off season for many Northern Hemisphere beach destinations. We love sharing dawn and sunset beach walks, usually with a meal afterward because we’ve worked up an appetite. We’ve enjoyed Cancun and several other Caribbean destinations, though our current favorite fall beach retreat is Myrtle Beach, SC. That region’s restaurants can be pricey, even in the off season, so getting an outstanding deal on hotel reservations is a must! Wherever we travel, we’ve found there’s nothing more romantic than the sound of the surf wafting through the balcony window on a mild fall evening.

One thought on “#RomanticTravel with Kim Iverson Headlee”